Today started much cooler and foggier than the last two. ISU provided 4 pits within the grounds of the Field Extension and Education Laboratory (FEEL), west of Des Moines. These pits gave the students an excellent opportunity to examine a Udoll-Aquoll catena. We began with 2 Hapludolls:

And ended with a beautiful Endoaquoll in a floodplain:

We are expecting to be working in rain tomorrow and on the competition day, so we described an additional pit as a team at the Lost Lake Farm (owned by the Dietzel Family), an Argiudoll on a summit position.

The team ended the day with a Q&A session with Gladdie about Tanzanian soils and agriculture.

Today was our first day in the Iowa State soil pits.  We had three practice pits and one optional pit (that we described as a full team). 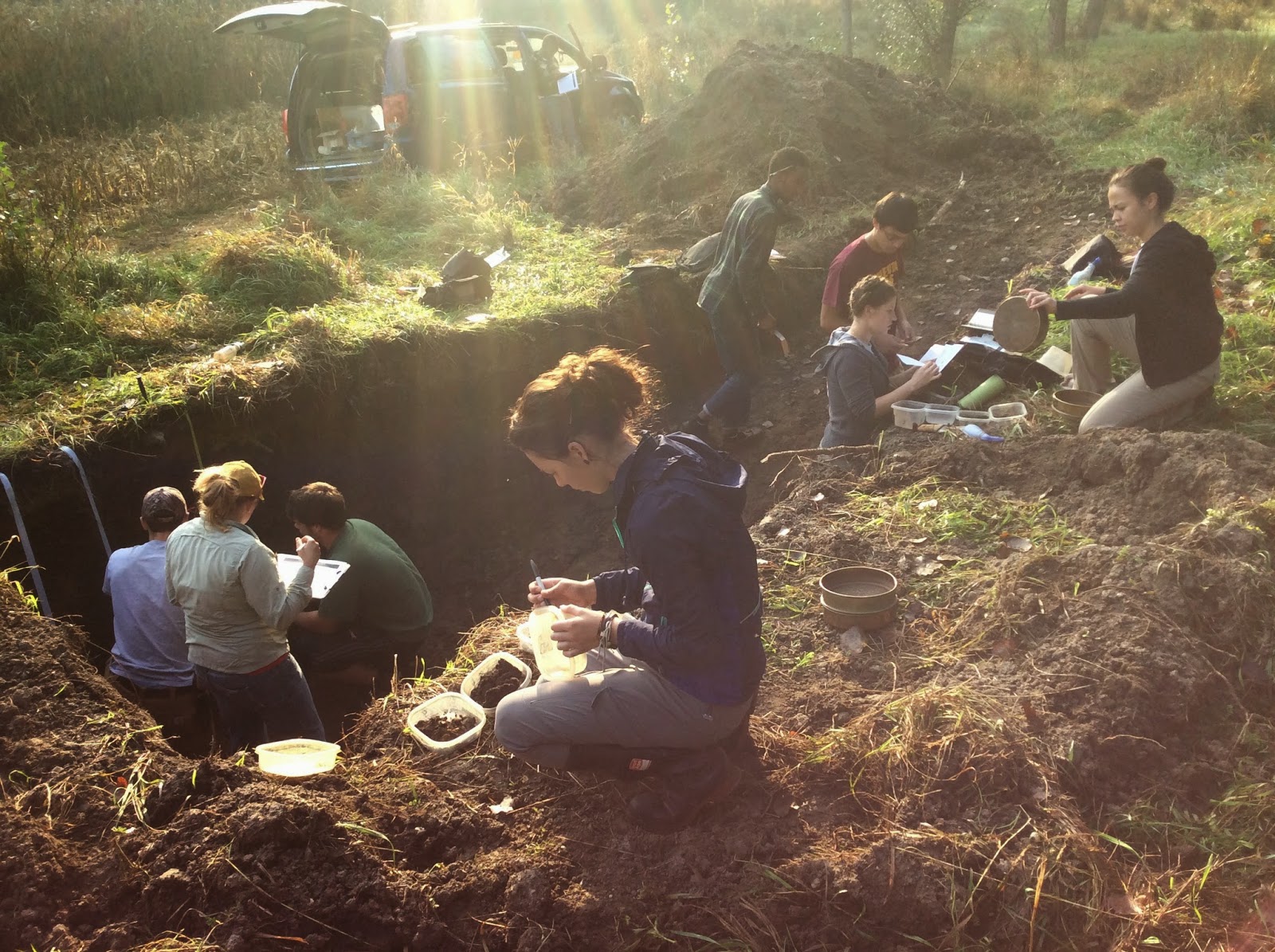 We described a deep Mollisol, and discussed local interpretations and naming conventions. Nic, our faithful coach, augered below the described pit to find a gleyed B horizon. 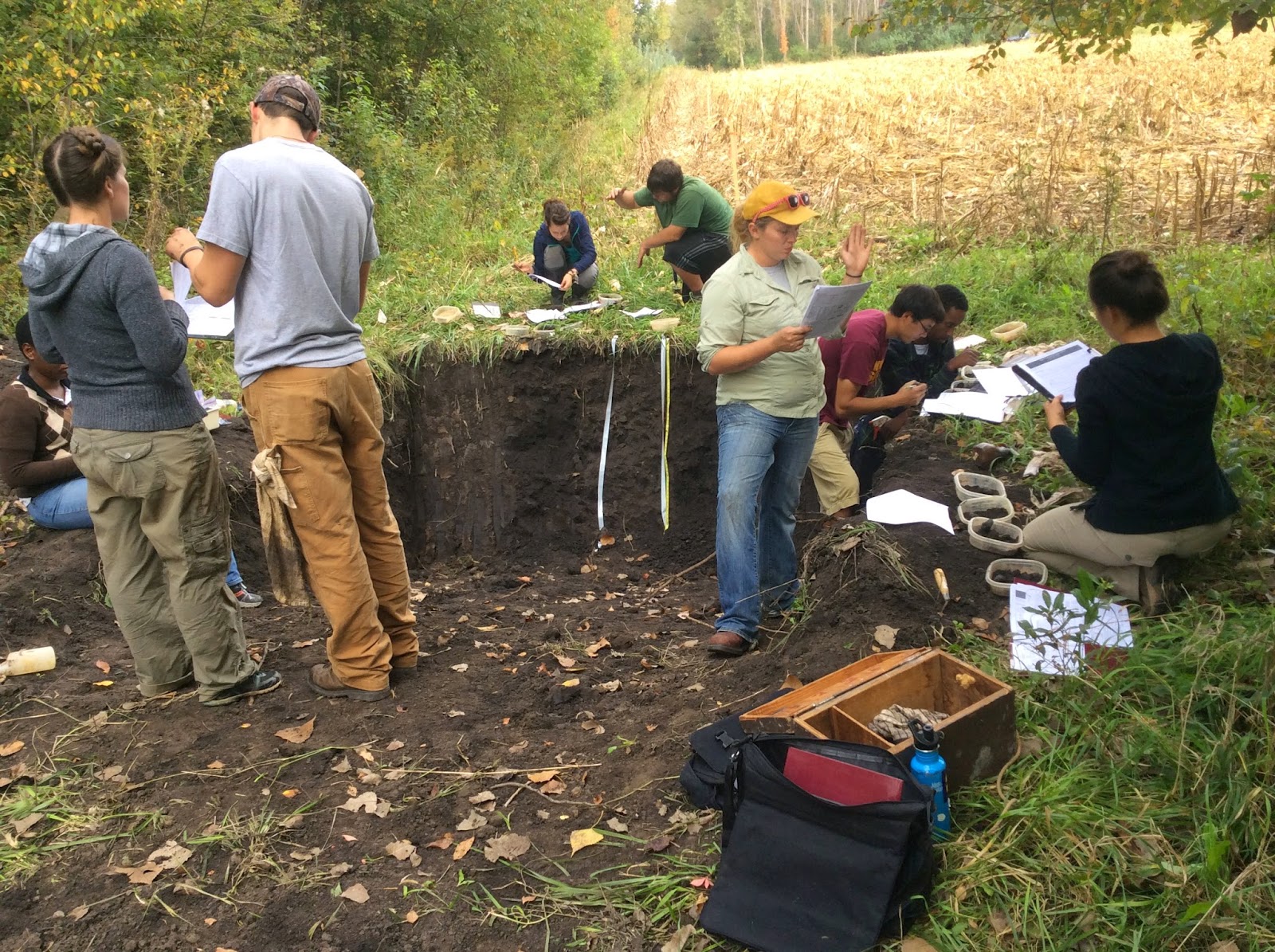 Our team left St. Paul at 0900 this morning and drove to Britt, Iowa, where we met with Phil Schroeder. Phil is an excellent agronomist with a deep knowledge and interest in soils and glacial geology. In addition, Phil is a graduate of Iowa State University - he currently manages the Goplerud Farm near the town of Wesley, Iowa. The Goplerud farm has land holdings north and south of the Algona moraine, so the team was able to see differences in two different parent materials, with glacial till on the north side of the moraine and some areas of glacial lake sediments south of the moraine. The team completed two auger descriptions of Calciaquoll profiles.

We arrived in Ames around 5:00pm, went to the grocery store and checked into the hotel. By 6:30 we were on the ISU campus eating dinner provided by our ISU hosts. We received a lecture on the soils and landscapes of Iowa from Dr. Lee Burras (ISU) - tomorrow we get to work in the pits!

One of the most interesting and attention grabbing interpretations on this year's Region V competition description sheet is the Iowa Corn Suitability Rating (CSR2). The CSR originally emerged as a response to state-level legislation in Iowa that "requires farmland assessments be based on earning capacity and productivity and that modern scientific soil surveys be used to determine equitable valuation" (ISU Extension, 2013). This legislation is of course a reflection of the central role that Iowa's agriculture plays in both state and national economics.

The resulting rating scheme (which is called the Corn suitability rating because of the dominance of the crop in Iowa in particular) has played a central role in land valuation across the state (ISU Extension, 2013). Of most interest to pedologists in this rating scheme, however, is the role that soil classification (to the Subgroup level) and expert judgment play (along with a number of other physical parameters) (Burras, 2013).

The CSR has been revisited, revised, and made more transparent based on improvements in technical knowledge of the distribution, properties and relationship of soils since the original rating was published (ISU EXtension, 2013). Students will be asked to compute a simplified version of the CSR2 based on Great Group, Family Particle Size, Field Conditions (Slope, Flooding, Ponding), Water Retention Difference and Soil Depth.

Estimating sand percentages in the field using the textural triangle and "bracketing" approach: 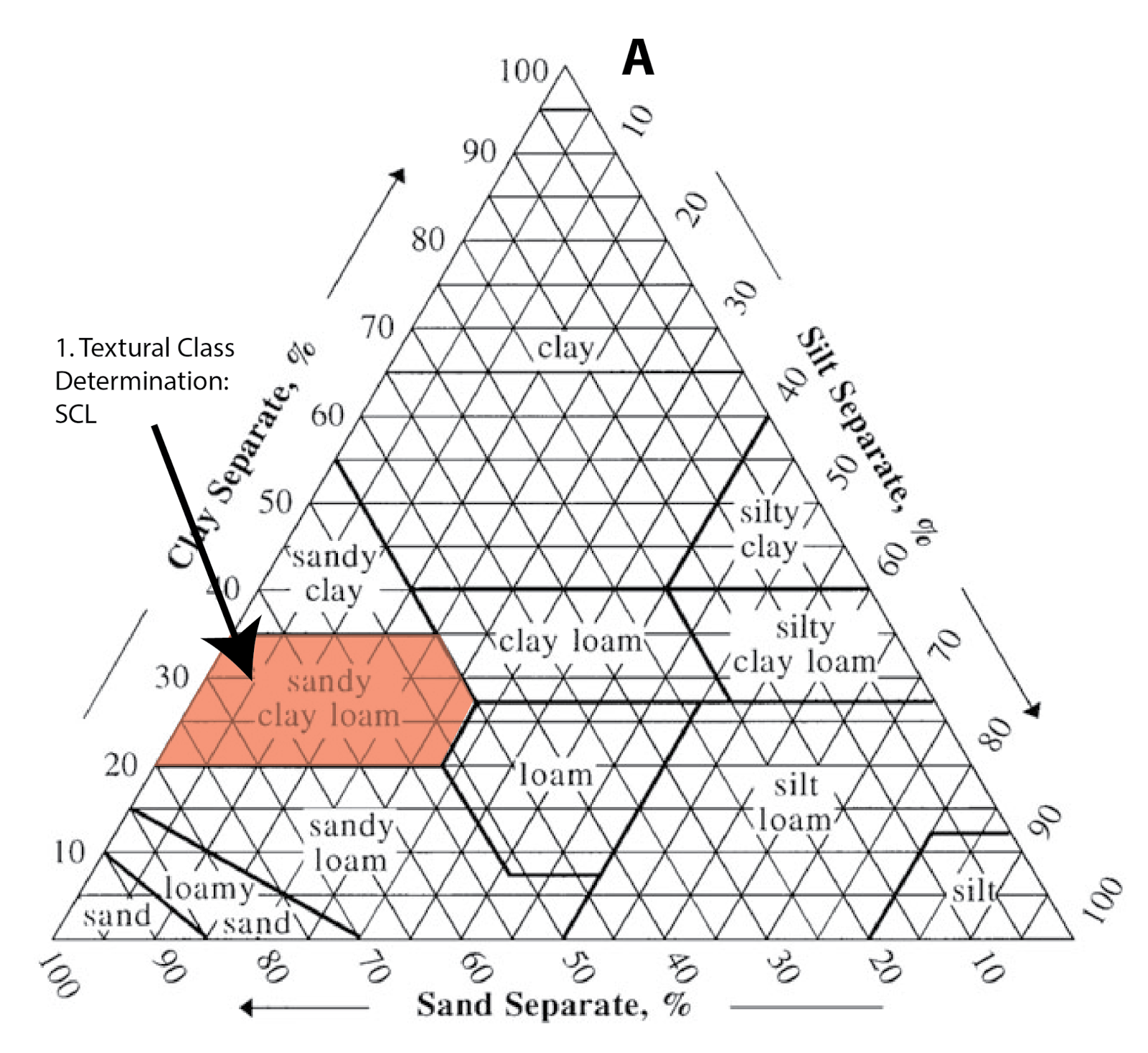 The Historical Development of the USDA textural triangle

Perhaps the two most important tools for describing and studying soils in the field are the USDA Soil Textural Triangle and Munsell Soil Color book. Both of these are very powerful calibration and standardization tools that allow us to transform our hands into quantitative particle size analyzers and our eyes into chroma meters. The development of each of these tools required extensive research and testing over a period of decades, and although the development of the Munsell Soil Color book has been well documented (Simonson, 1993), the narrative of the development of the USDA textural triangle is scattered across a range of published and grey literature.

In this post, we briefly explore the documented development of the USDA textural triangle and compare historical triangles to the present (post-1951) iteration.

Milton Whitney published the first plot of soil class boundaries in Cartesian coordinates (which become a right triangle because all size fractions must add to 100) in 1911 (Whitney, 1911). The coordinates of this diagram (Whitney, 1911, Fig. 1) are silt fraction (0-100%) on the x-axis and clay fraction (0-100%) on the y-axis. This work was an international landmark in establishing a quantitative basis for soil textural classes.

Fall is in the air and the tiling spades, augers, Munsell books and backhoes are out! Our team blog will be back up and running through the end of the Regional competition, so check back early and often.

The 2014 Region V Soil Judging Competition will be held from September 28th - October 3rd in Ames, Iowa (hosted by Iowa State University). We have a strong Minnesota formation this year and the team is pleased to announce that our visiting assistant coach will be Ms. Gladness Brush, hailing from Kilimanjaro, Tanzania. Ms. Brush currently works as an extension agent with the Selian Agricultural Research Institute (SARI - Arusha, TZ) and the CGIAR Climate Change, Agriculture and Food Security (CCAFS) Research Program in Lushoto District, TZ and is a graduate of Sokoine University, Morogoro, TZ.

Soil Judging remains the most important experiential opportunity for soils students. The team will gain a tremendous depth of experience in reading landscapes, describing soil profiles, and making use and suitability interpretations. And in a much deeper sense, they will learn to be bridge builders, connecting with people through a shared love of the land and the soil resource that crosses all ethnic, cultural and political boundaries. For this reason, they are world changers, representing the heart and soul of the University of Minnesota and the United States Land Grant mission. 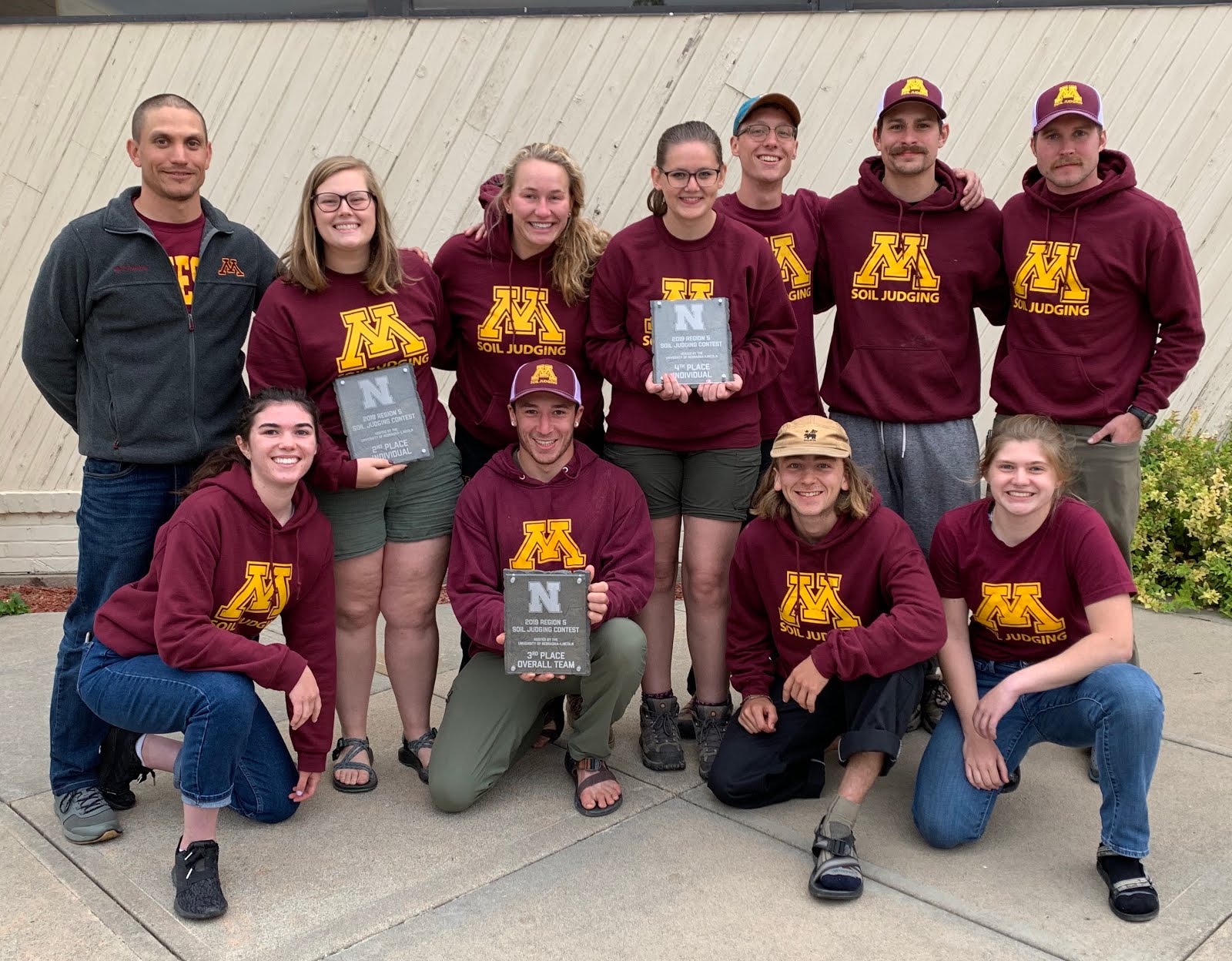 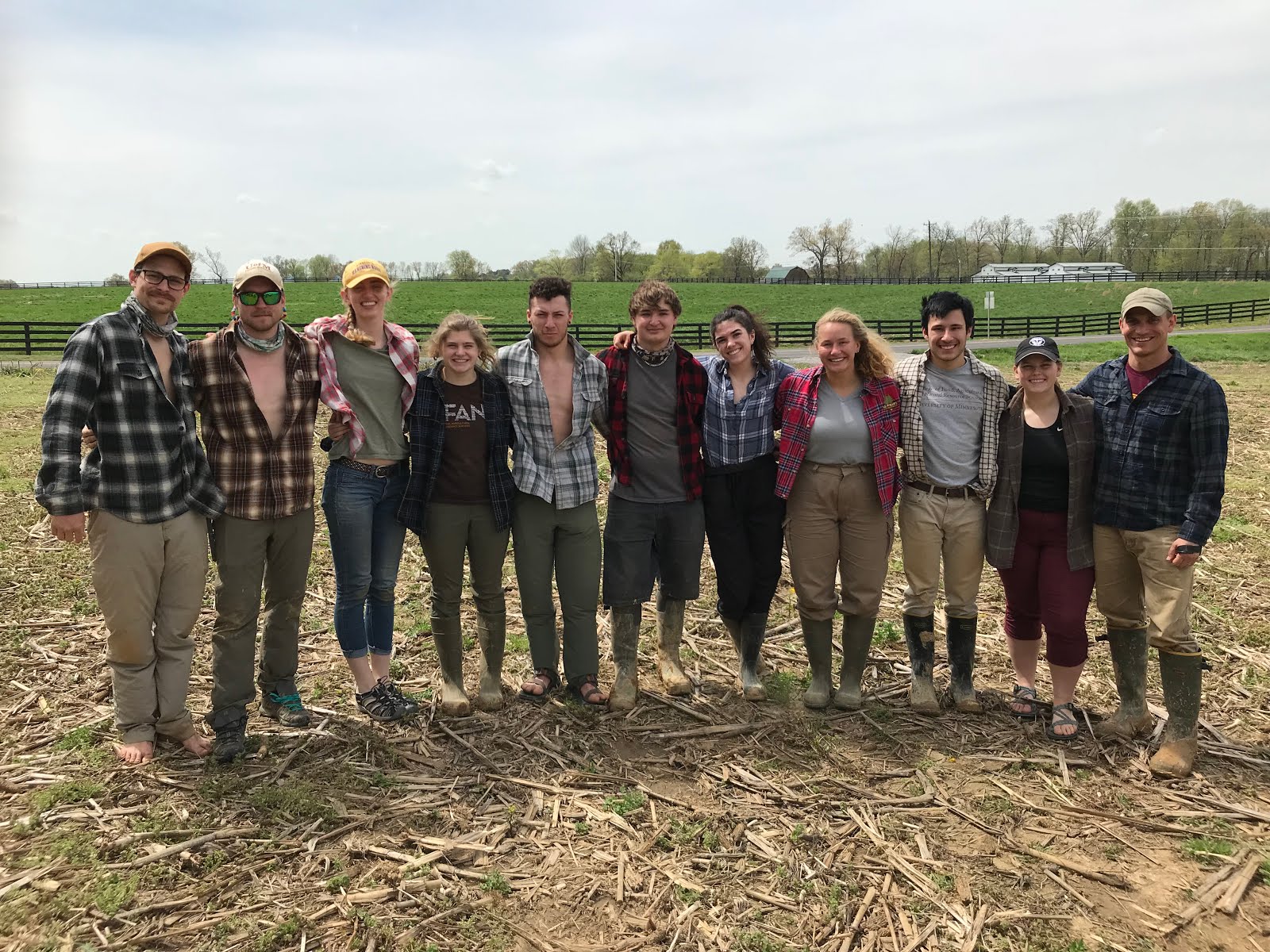 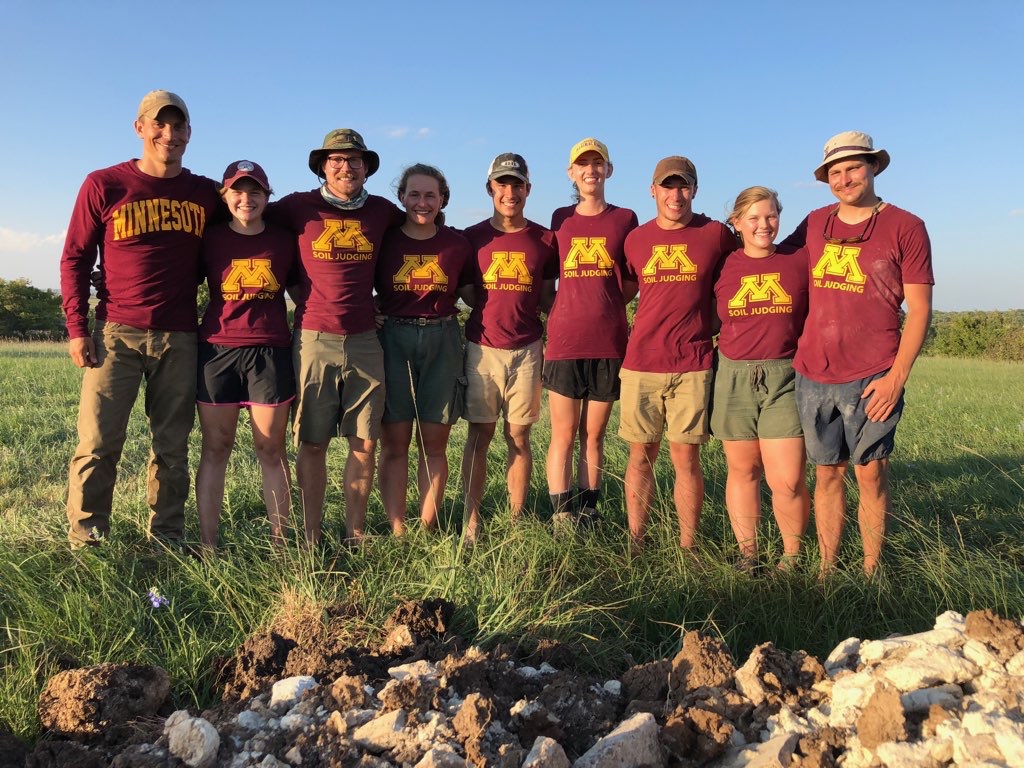 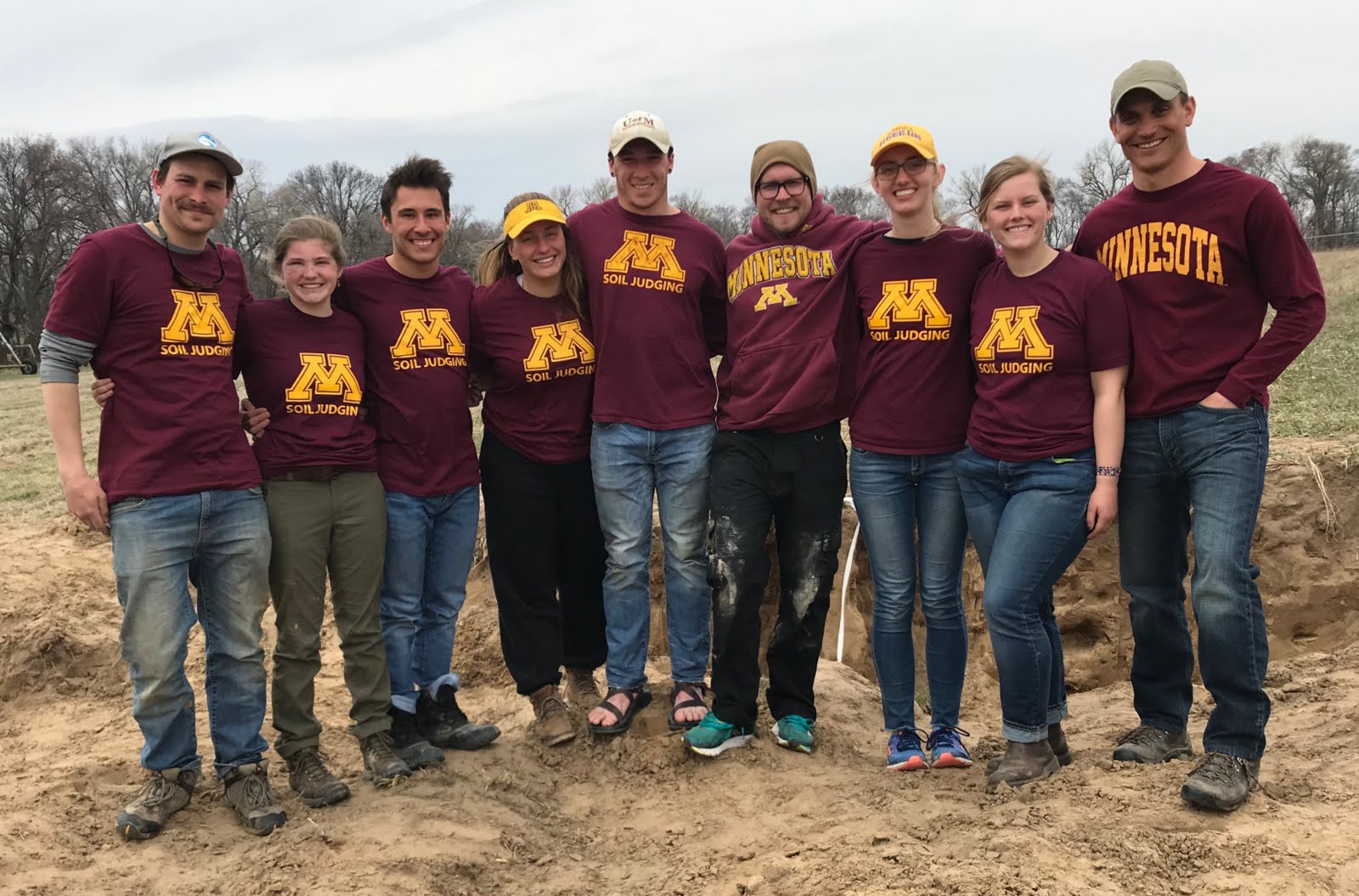 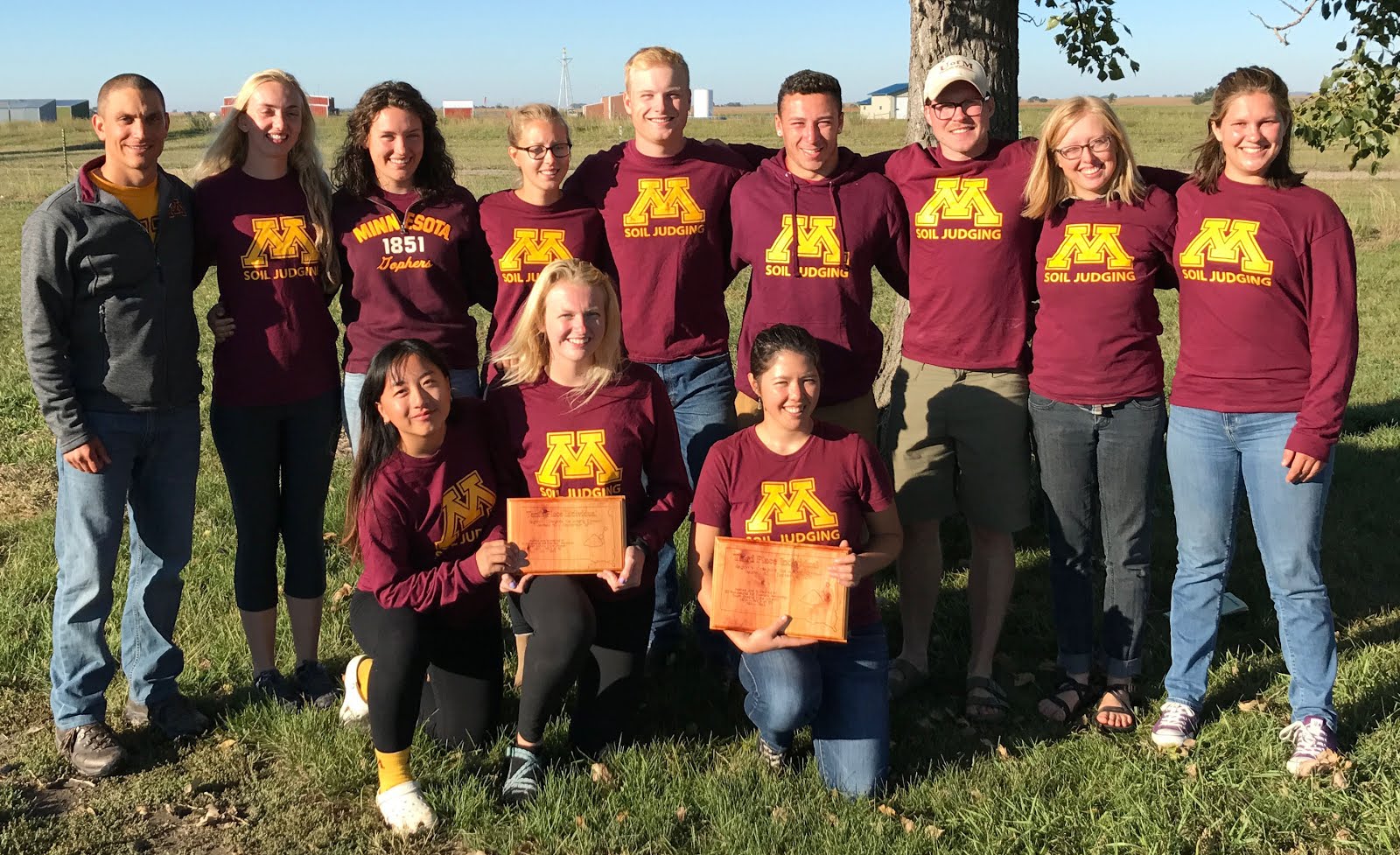 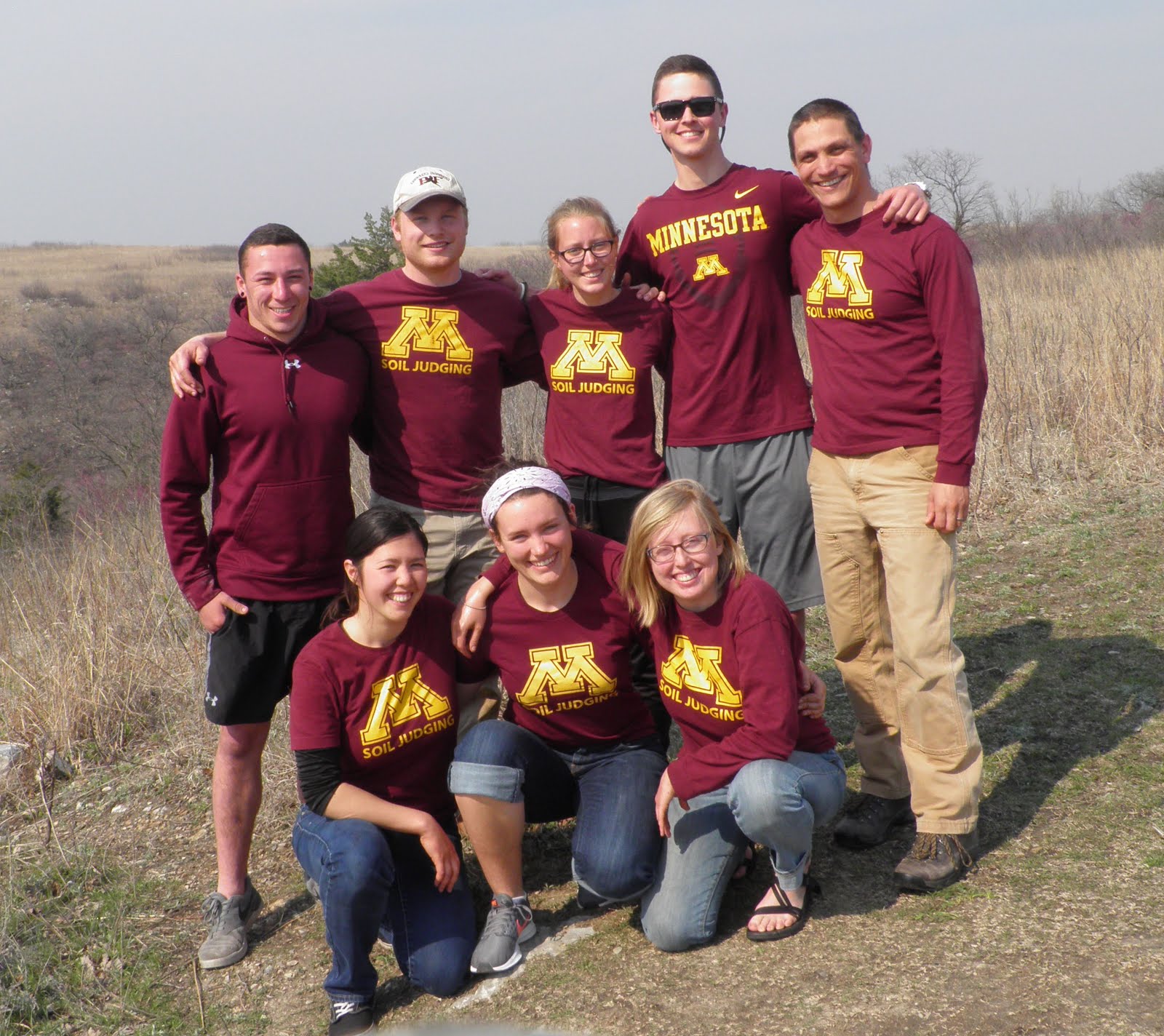 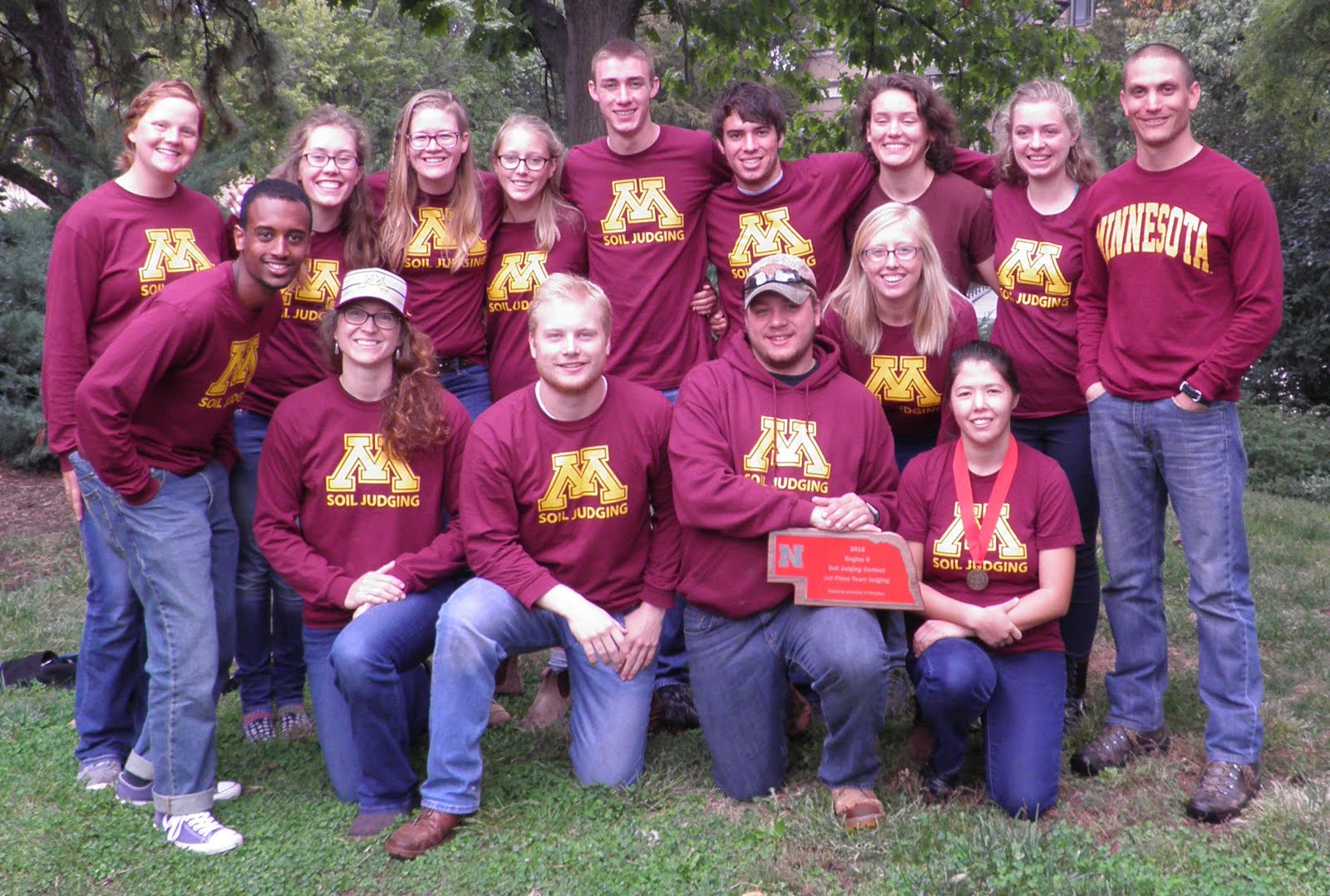 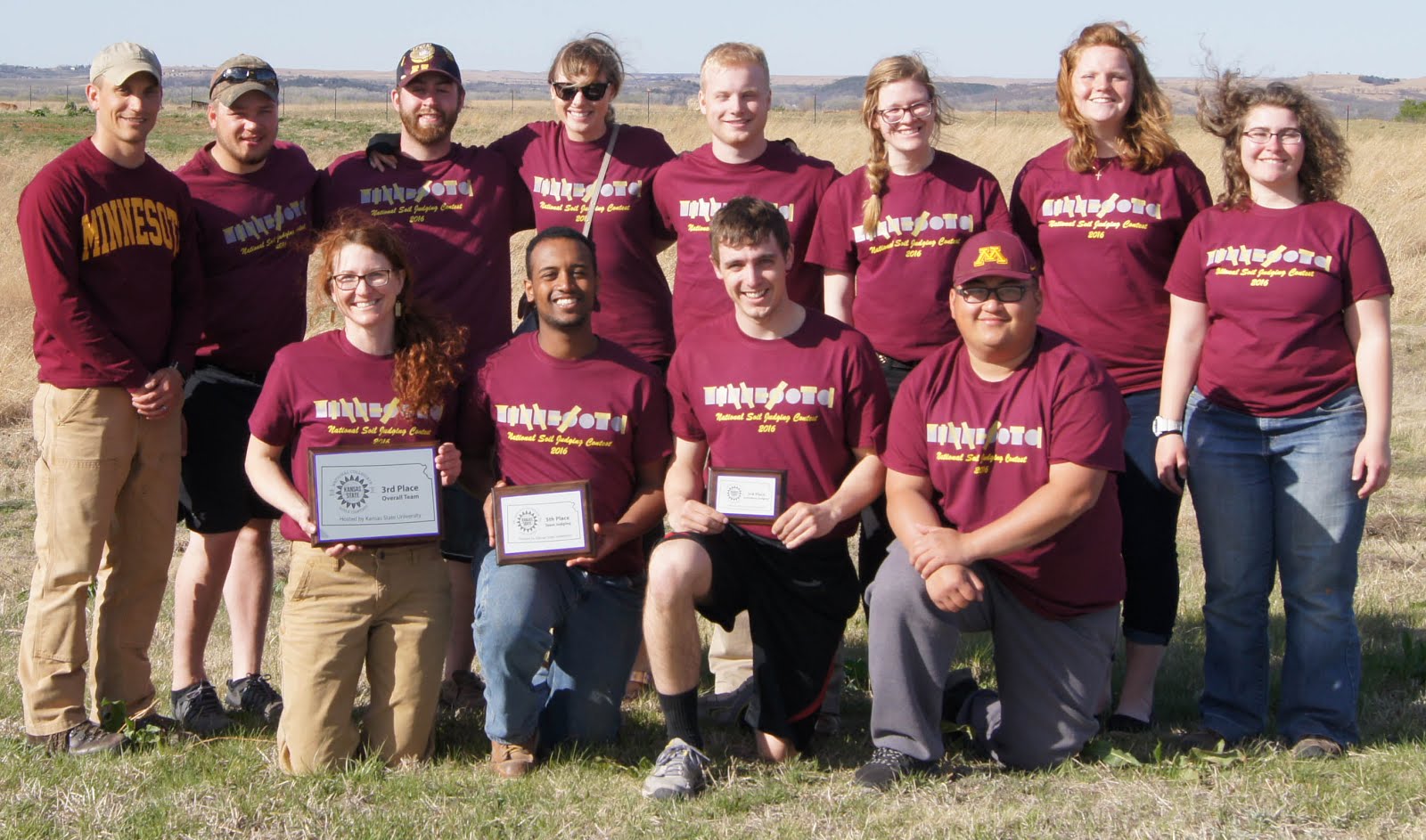 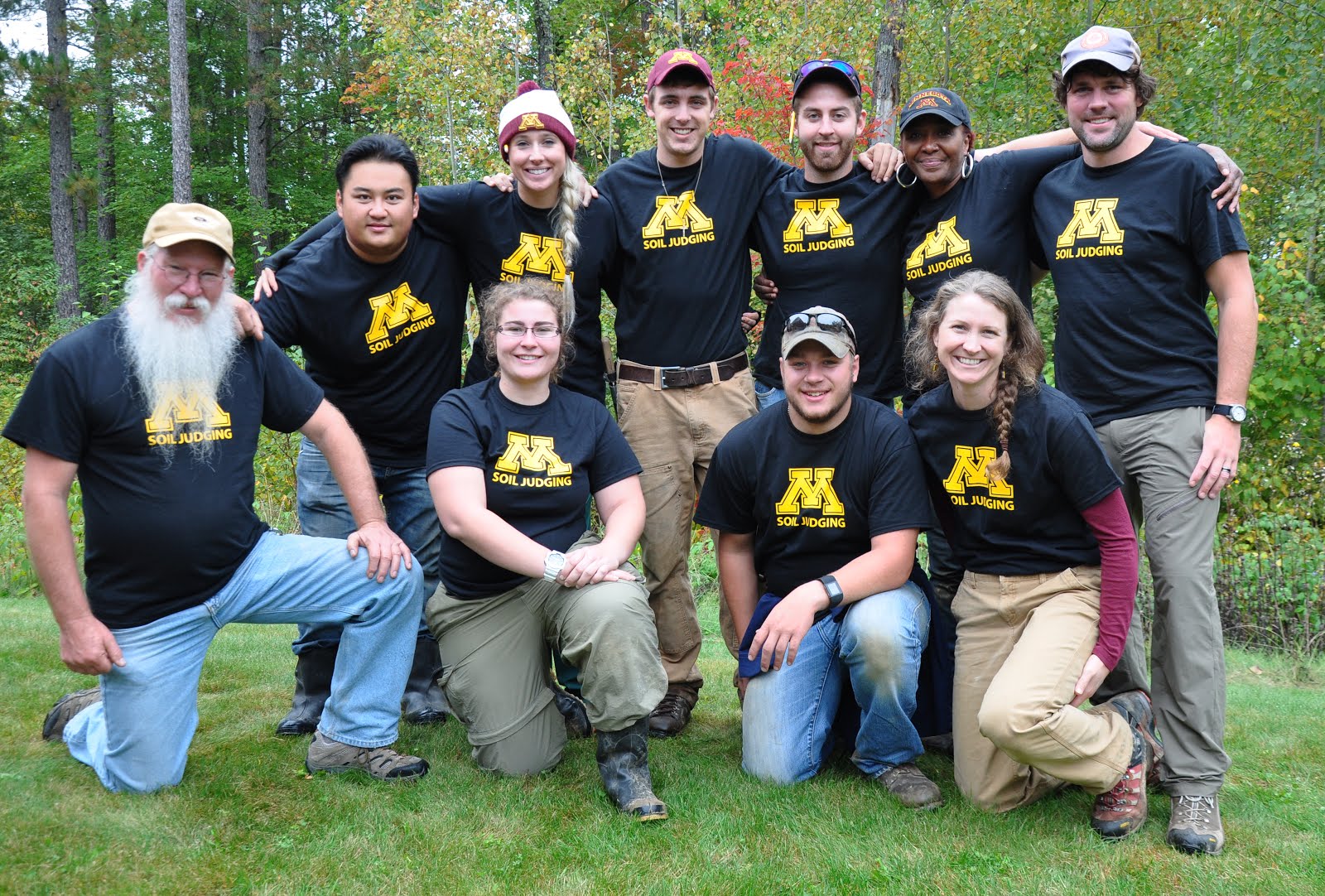 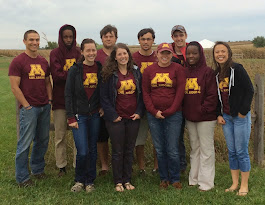 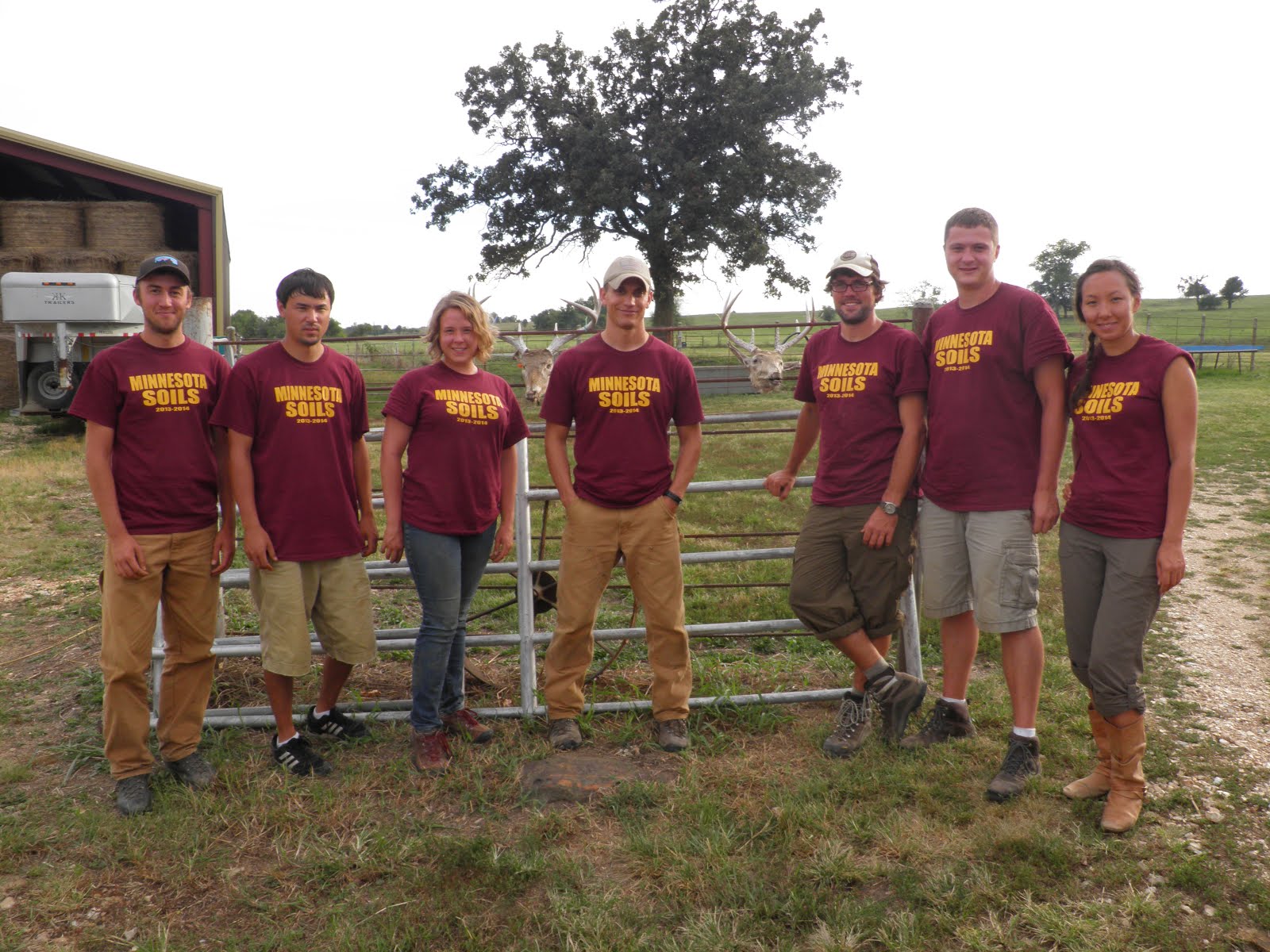